[Review] Sleep With the Lights On 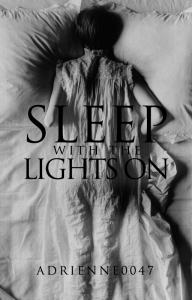 Book Title: Sleep With the Lights On

Summary: After months of nightmares, Cassie is desperate to be rid of them. When she says an incantation that appeared to her in one of these nightmares, she finds herself sucked down into the Underworld. Turns out getting home wont be easy, especially when a powerful stranger has big plans for her.

Review: The first think I noticed–as usual–is the incredible cover that this book has. The cover itself tells a story, and I think it’s a hugely important part of any book. Secondly, as I read the pitch, I was  instantly drawn in. Adrienne has done a really nice job weaving her plot through this book.
Everything throughout this is just so well thought out that I have trouble believing it’s really a Wattpad book. So often I see books with dozens of plot holes, but this book doesn’t have that. As I progressed through the chapters, I noticed little things that built upon the plot. This book is bursting with potential as a published best-seller. The basic plot points aren’t original–bad guy goes after innocent girl, girl finds a kind stranger to help her, someone else gets jealous and wants girl out of the way. And magical beings in an underworld isn’t really the most unique thing an author could use, either. That being said, there are a lot of distinctive things that set this book’s plot apart from that of a book using similar settings and ideals.
The voice with which Adrienne writes is very easy going and it doesn’t get boring at any point during this book. She’s very good at avoiding the use of a passive voice. It’s not overly wordy, which I’m extremely thankful for. There’s just enough description in this to allow the reader to picture the scene as it unfolds, but at the same time, it’s not overwhelming and the description doesn’t distract from the dialogue and from what’s going on.
As I’ve said, there is a lot of good in Sleep With the Lights On. That’s why this book earned an ‘A’. However, there are quite a few errors that I spotted, which do detract from the story a bit. Many thoughts are incomplete and there are several missing words that were simply left out of sentences, most likely on accident. At times, paragraphs tend to get a little bulky, and it’s daunting as a reader to look at a huge paragraph and think ‘I have to read all that?’ But the amount of good far outweighs the bad, so an ‘A’ is definitely earned;  a minus is added to the end to indicate that it’s not the best it could be.
In conclusion, I want to congratulate Adrienne on a fantastic book, and I’m anxious to read the end. The last chapter that is posted really builds up a lot of suspense and leaves me wanting more.
I recommend this book to anyone who enjoys fantasy, and I wish Adrienne luck with her writing.
xx Ashley

2 thoughts on “[Review] Sleep With the Lights On”

Have something to say? Cancel reply